This is My Story  About Tinnitus

One morning at nineteen years old I woke up with a subtle, high-pitched ringing in my right ear. As I was born deaf on my left ear, this was not the first time I made contact with the potential difficulties of hearing. Despite my single sided deafness and the few uncomfortable situations that usually brought about (sorry say that again and – where are you?), my hearing had always been a sense that I believed to generally be able to rely on.

In the weeks following that morning I did not wonder or worry much about the sound in my ear. During most of my daily life the tinnitus did not bother me and it was only at night and the quiet moments that the ringing would scare me. In these moments I would crave that absolute silence I had been able to perceive for most of my life.

After a few weeks with mild tinnitus, I started to question whether the ringing in the ears would go away. I decided to go see an ENT doctor. The young and friendly ENT told me that as the ringing had only been there for a few weeks, there was still a good chance that it would disappear (acute tinnitus can last anywhere between three and six months) and that only after six months of tinnitus it would probably stay with me and be classified as chronic tinnitus. He also told me he believed that my tinnitus was a result of over exposing my hearing to loud music.

As all other teenagers my age, I had spent at least two years of going clubbing and not wearing any ear protection. He was able to detect a minor hearing loss affecting the high-pitch frequencies in my right ear but told me overall my hearing was still ok.I left his office somewhat dissatisfied not being able to do anything against tinnitus other than protecting my ear from further damage. This however I started to take seriously.

A few years of young adulthood, many student parties down the road came one night that would change my life with tinnitus for the worse. I had already gotten a hearing aid in 2012 as it helped cover my light tinnitus and remedied some of the difficulties I was facing due to my high-pitch deafness. It was on Kingsday 2014 that this relatively ok setting I had started to get acquainted to an to live with changed. That night in Amsterdam, I partied in front of a few speakers with my earplugs not properly snug in. Three days after my tinnitus became what it is now: a very intense, all demanding high pitch screeching that in silence as well in as normal conversations overlays much of what I hear.

This change in intensity of my tinnitus that also came at a time when I was finishing my studies, I spent many nights not sleeping feeling very desperate and left alone. Eventually I got used to the new intensity and started living a “normal life again”. However there where many times when I wished I could go back to my initial and less intense tinnitus. In total, I have been suffering from tinnitus for nearly ten years, five of them with severe intensity.

During the last few years I started a search for a cure to running away from the tinnitus. Reading a lot of books (not only on tinnitus) and pursuing a career I thought I would love and doing the things that I like made me realize that it’s not the intensity or the hearing loss that limit me, but my ability to deal with them.

Sharing my story with you, I hope that people with tinnitus can realize that the intensity is something that can be dealt with. How you choose to live your life is entirely up to you but I want to help you get the most out of it despite tinnitus.

Hope to hear from you soon, I send deepest greetings from my heart,

Hi, I am Frieder from Berlin, Germany. Having lived with severe Tinnitus and a hearing aid for over ten years, I now share my experience around living a good life despite Tinnitus. Offering coaching and advice is my personal passion.

A Playlist for Tinnitus

Do the Things You Love 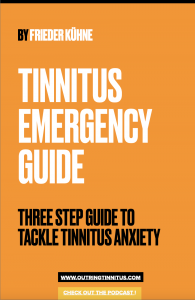 Ready to overcome tinitus anxiety and build your best life? This guide sets you up for lasting success!